The Factory of Tomorrow, today

The OMIC R&D lab sits on land that is being converted from a gravel pit into a sleek manufacturing center in Scappoose, 25 miles northwest of Portland.

The first floor is a showroom of the latest 11-axis lathes and milling machines, robotic arms, robotic legs, and robotic whatevers. There’s even a forklift truck you can learn to drive with virtual reality (VR) goggles. Upstairs is a small room with a few monitors and rolling stools. Some black headsets, with numbers written on blue painters tape, hang on pegs.

This is the Factory of Tomorrow.

You can be forgiven for thinking that the Factory of Tomorrow looks like the classroom of today. However, while most students are propped up in bed with a laptop this year, whoever studies here can reach out and almost touch the world — with a little haptic feedback.

The factory’s primary goal is to make training in manual labor easier. For example, say a temporary worker must learn to sort and stack boxes coming down a conveyor belt. Instead of just watching a video, they can practice using Oculus Quest 2 headset ($299), picking up virtual boxes until they have the Tetris mentality down.

The Oculus interface is very familiar. Put on the goggles, and you’re in that familiar virtual lobby, a geodesic dome in a California landscape, complete with sparse furniture and a log fire. But shine a virtual laser pointer at the right part of the menu, which consists of VR films of animals and obscure European cartoons, and you enter the world of engineering.

OMIC is working with OMEP’s small to midsize businesses to see if using VR or AR in their manufacturing process is worth it. They call it “de-risking the investment.”

OMIC believes that Americans are being left behind in the technology arms race by overseas companies.

OMEP’s goal is to break the perception that VR and AR (augmented reality) is only for big companies like Toyota, Boeing and Amazon.

At the Factory of Tomorrow, they have designed a short manufacturing simulation to give small businesses a place to experience “Industry 4.0” or digital automation in action. The hands-on experience could help, say, a bike part exporter to figure out if some of its tasks could be automated or refined.

One other factor is accessibility.

Getting time on a million-dollar milling machine, with a paid instructor, is expensive. This technology can reduce that cost.

Grant Kirby is the program director at the Oregon Institute of Technology and of distance learning at OMIC R&D. The factory is his baby. Kirby told the Business Tribune, “The sweet spot is the Warm Springs Indian Reservation. We need to have this kind of training available to everybody where they’re at.” He said that a shortage of gear and bandwidth stands in their way — but not for long.

So, could somebody in Warm Springs learn to operate a CAD machine from scratch without leaving the reservation?

“Yes, but the power of this technology is it helps screen good candidates,” said Kirby. “Part of the problem is getting people trained. You bring 100 people in to train them, and maybe 30 have the skills or the desire. But this immersive, hands-on stuff is at the next level.” 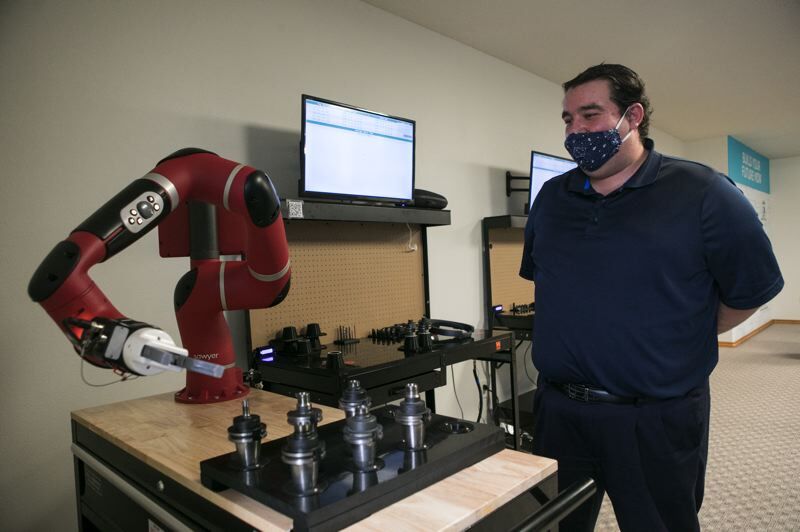 This kind of technology helps people get a taste for using a CAD machine, but there’s no substitute for getting a hands-on feel for metal or any other material.

For example, Factory of Tomorrow instructor Isaac Forehand, who is also an application developer at Ineality, is working on taking his sewing training into the prisons. The goal is to train people that are getting ready to be let out.

“There’s a huge demand for industrial sewers not just in this state, but everywhere. So, we’re in discussions with a lot of workforce development groups,” said Forehand.

Jason Stratton, a manufacturing consultant at OMEP, said that it’s one thing to read about VR and AR, but manufacturers need to “actually sit down and see the technology, feel the technology, understand the technology and start to get a picture of how that might relate to their manufacturing environment, and to ask the questions of the experts to be able to actually interact.”

Another value of the technology is in the retention of employees rather than replace them with robots.

“A lot of these technologies are designed to improve the training, lead time, and improve the actual retention of employees,” said OMIC’s Kirby. “So it’s really not to help reduce headcount. It is really to improve the productivity of the headcount they have helped to keep and empower current employees to maybe learn new skills easily.”

“For example, food and beverage is still growing rapidly as an industry sector in Oregon, and they often struggle with having a successful onboarding process. We can streamline that process shorten the time that it would take for a new hire to become fully contributing.”

It can apply to safety and regulatory work. Workers in any plant can do their safety training remotely, even off the clock. A blueberry processor could use the knowledge they gained in their food handling training directly to blueberries in a virtual environment. “The learning curve is very steep, but people learn quicker with their hands,” said Kirby.

Students from Scappoose High School interned at the Factory of Tomorrow during the summer of 2020. They programmed assets into the Oculus Quest environment using Unity, the software many video games are written in.

A cobot (robot coworker) demonstrated repetitive tasks in one corner, such as placing an object on a mark. Stratton explained that many people are still doing repetitive tasks, such as pulling on a plastic tab on a product to see if it gives way too easily. If it does, the product is rejected. If not, it goes in the good pile. The job is a recipe for repetitive strain injury and mental burnout.

“The operators are the ones that are always calling in sick because they’re hurt,” said Kirby. “Or they just don’t like their job, and they quit. Or you’re just standing there plugging something in and pulling it out all day long.”

Augmented reality is also good for dirty work, such as exploring a sewer with a robot and tasks such as starting up a big machine, which requires a checklist of safety procedures.

Skilled workers can also record much of their knowledge on video or via voice-to-text as they walk through a complicated task. This is useful as baby boomers retire, and their scarce replacements need to be quickly trained.

On a tour of the R&D center downstairs, where students and companies can try out new machines, Craig Campbell, the executive director of OMIC R&D, showed off a new $2.5 million machine, WFL’s M50 mill turn. WFL of Linz, Austria, provides it on a zero-cost lease. WFL will take it back and sell it in a couple of years, but for now, they are happy to have as many people as possible use their machines, including staff from Daimler, Vigor, Blount International, and Boeing.

“Here we’re able to use a machine like that solve a problem that any of those companies might have in their manufacturing line, but they can’t take the machine offline,” said Campbell. “So, they come here. We find the solution, and then they can take it back home and inject it right into the manufacturing line.” Campbell explains how a nearby machine, called a Capture 3D, uses optical and blue light to scan a part down to two microns. “It gives you a colored topographical map of the part to say, ‘Here’s where you have some areas you need to smooth out, or this is where you’re going over on your cuts.’”

On a pallet nearby is a chunk of steel that staff estimate weighs 200 pounds, sitting on another block that weighs 1,000 lbs.

It’s a plastic injection mold, but it was made not by milling (“subtractive manufacturing” or cutting away metal) but by additive manufacturing, which is 3D printing with powdered metal and a laser. Companies, including Daimler, use injection molds for custom truck parts, such as plastic parts in the cab, and this method can save time and metal. The part was flown to Scappoose from Germany. This is how big business does it. Campbell says manufacturers have no problem taking a milling machine the size of a streetcar carriage apart, laying it out inside an Antonov cargo plane, and moving it internationally.

But OMEP’s focus is on getting small- and medium-size manufacturers a hands-on look at the new automated tools. It’s the kind of work you can do in a hoody and jeans rather than a boiler suit.

“They need to take the next step, but they’re stuck in pilot mode, afraid, and not knowing how to move forward with integrating technology into their lab or facility. They ask, ‘How can I do this in a way that’s not going to cause my company to lose productive time because I’m spending time over here working technology pieces?’ That’s where we come in as an organization.”

Maybe it was an off day, but the technology was not quite ready for prime time when I tried it out.

When it came to picking up a pair of virtual Vernier calipers, my digital hands on the screen couldn’t get a grip. It was dismissed as a programming error.

An exercise called for taking a lump of material off a table and setting it up inside a CAD machine for milling, but the lump fell and got stuck behind the apparatus.

However, someone would probably overcome this after a few uses — particularly someone familiar with playing video games.

Another program used Microsoft HoloLens ($1,500). These are Augmented Reality goggles that look like a cross between Google Glass and Geordi’s visor in Star Trek. They superimpose useful data on top of what you see in real life. After learning some mid-air hand gestures which turned swiping and air tapping into gripping, pushing and turning, I was supposed to operate a cobot (robot coworker), but the headset froze, and we left it in Microsoft reboot hell.

A cobot is a robot designed to work alongside humans. It has sensors to protect the human, so instead of clotheslining you if you get in the way of its arm, it always yields. The one at the Factory of Tomorrow ran through its tasks well, sensing when this human had moved things around.

One thing made me realize the power of the technology: In the Oculus goggles, I got to look around a virtual facsimile of the large, first-floor room where the machines are kept, including a virtual forklift truck. Later on, I walked around the actual room. Now, as I write this, I can’t remember if there was a real forklift there or whether I am just remembering the virtual and imagining a real one. It seems that if the experience feels real, that’s enough to make a deep impression.

Oregon Manufacturing Extension Partnership (OMEP) is a not-for-profit team of manufacturing professionals whose mission is to help small to mid-sized Oregon manufacturers transform the way they do business and become more competitive.

According to OMEP, “The Factory of Tomorrow is a space where companies can see and experiment with many different technology applications that translate to real-world manufacturing scenarios.”

The Oregon Manufacturing Innovation Center, Research & Development, abbreviated as OMIC R&D, is a research facility located in Scappoose, Oregon. OMIC R&D’s mission is to develop and apply advanced metals manufacturing technologies and processes for competitive industrial advantage and academic growth while inspiring and educating the next generation’s manufacturing workforce.

Industry 4.0 is the application of technology to transform how industrial companies operate digitally. These technologies include industrial IoT, automation and robotics, simulation, additive manufacturing, and analytics. Industry 4.0 is driven by a need to boost efficiency, become more agile to respond to market unpredictability, improve quality, and to enable new business models. (source: PTC.com)